The Pentagon is pushing ahead with an expansion of the nation’s homeland missile defense system, despite a newly recognized deficiency that affects nearly all the system’s rocket interceptors, a Los Angeles Times investigation has found.

The problem threatens the performance of small thrusters attached to the interceptors. In the event of a nuclear attack, the thrusters would be relied on to steer interceptors into the paths of enemy warheads, destroying them.

If a thruster malfunctioned, an interceptor could fly off-course and miss its target, with potentially disastrous consequences. The interceptors are the spine of the Ground-based Midcourse Defense system, or GMD, the nation’s primary protection against a missile strike by North Korea or Iran.
http://www.latimes.com/nation/la-na-missile-defense-flaw-20170226-story.html

By Mark Prigg For Dailymail.com

The US Air Force is spending $15m on a mysterious drone killing system from an Israeli firm.

The contract for  ‘counter-unmanned aerial systems’ will supply 21 kits, which are believed to be earmarked for dealing with the growing threat of drones from ISIS.

However, details of the kits and how they will work have not been revealed, although it is believed to be a modified version of the firm’s existing ‘drone shield’

Bolton told the Washington Free Beacon in an exclusive interview that the One China policy, which was established during President Richard Nixon’s visit to China in 1972, is “ahistorical” and fails to reflect the current reality in East Asia, where natives of Taiwan overwhelmingly identify as “Taiwanese” rather than “Chinese.”

“The One China policy is inherently ambiguous,” Bolton said. “China thinks it means one thing, we think it means another.”

The comments by the National Intelligence Service in a private briefing to lawmakers come as Malaysia investigates the poisoning death of Kim’s estranged elder half brother, Kim Jong Nam. That investigation is still going on, but South Korea says it believes Kim Jong Un ordered the assassination, which took place Feb. 13 at Kuala Lumpur’s airport.

The spy agency told lawmakers that five North Korean officials in the department of recently purged state security chief Kim Won Hong were executed by anti-aircraft guns because of the false reports to Kim, South Korean lawmaker Lee Cheol Woo said. It’s not clear what false reports they allegedly made, and the NIS didn’t say how it got its information.

China announced that Washington and Seoul will face “consequences” over a land swap deal which will allow the US to host its THAAD missile defense system on South Korean soil – a move which Beijing claims will undermine its own ballistic capabilities.

The agreement, which involves a land swap between Seoul and retail giant Lotte, was approved on Monday.

“We received a message that the board approved the exchange of land for THAAD (Terminal High Altitude Area Defense) deployment,” the South Korean Defense Ministry said in a statement, as quoted by AFP.

That news was met with disapproval from China’s Foreign Ministry, with spokesman Geng Shuang claiming the system “severely disrupts regional strategic balance and jeopardizes the strategic security interests of regional countries including China.”

Beijing “will definitely take necessary measures to safeguard its security interests,” he said during a news briefing, adding that “all the consequences entailed will be borne by the US and the Republic of Korea.” 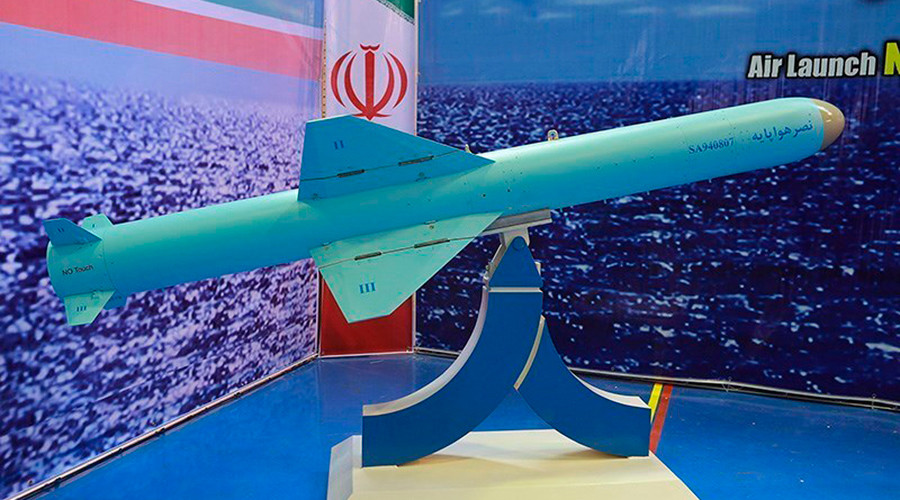 The latest naval cruise missile, called Nasr, was test-fired during ‘Velayat 95’ naval exercises stretching from the Strait of Hormuz and Oman Sea to north of the Indian Ocean, Defense Minister Hossein Dehghan said, as quoted by the Fars news agency on Monday.

The Nasr was successfully launched and hit the predetermined targets, the minister added, according to Mehr news agency.

The Dehlaviyeh anti-ship missile was reportedly tested for the first time and hit the target as well.

Amid tensions with the United States, Iran announced on Monday that it tested two missiles during a series of naval drills in the Persian Gulf. One was fired from a submarine, it said.

It was reported back in 2012 that Iran had based the Dehlaviyeh on a Russian anti-tank missile.

The ranges of the two missiles were not given.

Cruise missiles — such as the Nasir fired in the most recent missile launches — are not covered by UN Resolution 2231, which was passed shortly after the nuclear deal with Iran was signed in July 2015 and calls on Tehran “not to undertake any activity related to ballistic missiles designed to be capable of delivering nuclear weapons, including launches using such ballistic missile technology.” Iran argues that its ballistic missile program is also not covered by the resolution because it does not have a nuclear weapons program.The most recent Iranian missile firings follow the launches of a ballistic missile and cruise missile in late January — both of which are nuclear capable — with the former resulting in new US sanctions on a number of entities involved in Iran’s ballistic missile program and a warning from US President Donald Trump that the Islamic Republic had been “put on notice” and that “nothing is off the table” in terms of a military response to perceived Iranian provocations.

However, the test is likely to be viewed in Israel and the US as another aggressive maneuver by Tehran to expand its missile program.

A German hostage in the conflict-wracked southern Philippines has been beheaded by Islamist militants, with the video being posted online by the terrorism monitoring group SITE.

In the video released on Monday, the hostage, 70-year-old Jurgen Kantner, can be seen in a jungle clearing with his hands tied behind him. He can be heard saying the words “Now he’ll kill me” before a man starts cutting Kantner’s head off with a large knife.

Kantner was being held by men loyal to Muammar Askali aka Abu Rami, a commander in the Islamist militant group Abu Sayyaf, for a sum of 30 million pesos (approximately $500,000) before talks for his release collapsed on Sunday, the deadline for the ransom payment. He had been kidnapped almost two months ago when he and his wife, Sabine Merz, were cruising through the Philippines in their yacht through an area controlled by Abu Sayyaf. Merz was reportedly killed when she tried to fight back with a shotgun.

Martin Chulov in Beirut and Tom McCarthy in New York

One of al-Qaida’s most senior leaders has been killed by a US drone strike in north-west Syria, jihadi leaders have said.

Abu al-Khayr al-Masri – who has been part of the global jihadi organisation for three decades and was a son-in-law of its founder, Osama bin Laden – was killed on Sunday when a missile fired from a drone hit the small car in which he was travelling. Masri had also been a close aide to al-Qaida leader Ayman al-Zawahiri, a fellow Egyptian.

The Russian frigate Admiral Grigorovich left the port of Sevastopol in Crimea on Monday for the Mediterranean where it will join the country’s naval forces deployed near the Syrian coast, a naval official said.

A Reuters witness saw the ship leaving its moorings in the naval port of Sevastopol.

“It (the frigate) will be operating as part of the permanent Russian Navy force in the Mediterranean,” the Interfax news agency quoted the navy’s Captain Vyacheclav Truhachev, a spokesman for the Black Sea fleet, as saying.

Israeli Air Force jets on Monday afternoon bombed several targets in the Gaza Strip, after an early-morning rocket attack on Israel’s south, according to Palestinian reports.

Palestinian sources said the jets attacked a position west of the Nuseirat refugee camp in the central Strip. Subsequent reports said the jets also bombed positions in Rafah and Khan Younis in the southern Strip.

An Israel Defense Forces spokesperson would not comment on the Palestinian reports.

Russian Ambassador to Indonesia Mikhail Galuzin refused to venture into any details on the planned purchase, only noting on the readiness for dialogue and consultation on each item of Indonesia’s interest.

“Russia is ready for the broadest possible cooperation with our Indonesian friends in the areas of military and technical activities,” Galuzin said during a briefing in Jakarta on Monday.

Citing the positive relations in the military and technical fields between both countries, Galuzin said progress on the deal would be revealed in due course “as soon as there are concrete results.”

Six Russian diplomats have died since November, in addition to an aide to a former deputy prime minister. All but one died on foreign soil. Some were shot, while other causes of death are unknown. Note that a few deaths have been labeled “heart attacks” or “brief illnesses.” Here’s what you need to know:

At least 97 people have been detained over the past 4 months while they were attempting to escape from Turkey’s post-coup witch hunt to Georgia, state-run Anadolu Agency said.

Thousands of people have fled Turkey due to a massive witch-hunt launched by the Justice and Development Party (AK Party) government against the country’s dissidents and the sympathizers of the Gülen movement in particular since a failed coup attempt on July 15. The government accuses the movement of masterminding the coup.

About 130,000 people have been purged from state bodies, 92,000 detained and 45,000 arrested since the coup attempt. Arrestees include journalists, judges, prosecutors, police and military officers, academics, governors and a comedian.

Law enforcement agencies have rounded up at least 97 people near Turkey’s Georgian border over the past 4 months.

ANKARA, Turkey — As part of his trip to neighboring Turkey, the Kurdish President Masoud Barzani is meeting on Monday afternoon with Turkish Prime Minister Binali Yildirim in Chankaya Palace in Ankara, the leaders’ third meeting in the past two months.
Rudaw reporters in Istanbul said it can be expected they will discuss energy and Turkey’s assistance for the Kurdistan Regional Government (KRG) to overcome its economic crisis.

Additionally, they reported the topics may include Kurdistan’s independence, the presence of the Kurdistan Workers Party (PKK) in Shingal, as well as the ongoing offense against ISIS in Iraq’s western Mosul.

As part of an official visit, Barzani arrived in Istanbul on Saturday, meeting with Turkish President Recep Tayyip Erdogan alongside a number of high-ranking officials.

A bomb planted by the PKK terrorist group exploded striking a passing freight train in the southeastern province of Diyarbakir on Monday, according to Turkish security sources.

The source, who spoke on condition of anonymity due to restrictions on talking to media, said the explosive had been planted on the railway track in the province’s Sur district.

The source said the explosion caused no human casualties.

Donald Trump’s choice to be secretary of the navy has withdrawn from consideration for the post, citing concerns about privacy and separating himself from his business interests.

Trump White House scrambles to check scandal over FBI inquiry into Russia ties
The nominee, Philip Bilden, was an intelligence officer in the army reserve from 1986 to 1996. He relocated to Hong Kong to set up an Asian presence for HarbourVest Partners, a global private equity management firm. He recently retired from HarbourVest Partners after 25 years.
https://www.theguardian.com/us-news/2017/feb/27/trump-nomination-navy-secretary-withdraws-philip-bilden