ISIS’ threat to Britain is reaching new high, says London mayor as he warns that police cuts could cost lives

The terror threat from ISIS is reaching new highs and cutting police budgets could cost lives, Sadiq Khan has warned.

The London Mayor said the danger of attacks in the capital had risen since he entered city hall last May and keeping people safe was becoming ‘increasingly difficult’.

Terror target May Force One: Stunning security lapse as PM’s flights are left visible on a website tracker

By Michael Powell And Ned Donovan For Mail On Sunday

Terrorists can follow every movement of the Prime Minister’s official aircraft live by using a mobile phone app, The Mail on Sunday can reveal.

The astonishing security lapse made Theresa May ‘a flying target’ as she arrived in the terror hotspot of Turkey from Washington last week, experts warned.

The exact location of the aircraft, dubbed ‘May Force One’ – along with its height, direction and speed – was broadcast online as it came into land in Ankara, the site of repeated terrorist attacks.

Last night, experts called for the transponder – the on-board device that broadcasts its location – to be switched off, as is the case with the US President’s Air Force One jet.

Chris Phillips, the former head of the National Counter Terrorism Security Office, said: ‘This is perfect information for a would-be terrorist. They should have turned off the tracker on the plane. It is ridiculous and irresponsible that this information is publicly available.

Detectives are probing the Twitter account of Egyptian national  Abdallah El Hamahmy, who is believed to have arrived in France eight days before the attack.

Iran holds military exercise in defiance of US sanctions

In apparent defiance of the new sanctions imposed by the Trump administration, Iran held a military exercise Saturday to test missile and radar systems.

The aim of the exercise, held in Semnan province, was to “showcase the power of Iran’s revolution and to dismiss the sanctions,” Iran’s elite Revolutionary Guards website said, according to Reuters.

During the exercise, a senior commander of Iran’s Revolution Guard said the country’s missiles will come down on the country’s enemies if they do wrong.

“If the enemy does not walk the line, our missiles come down on them,” Gen. Amir Ali Haijazadeh said. 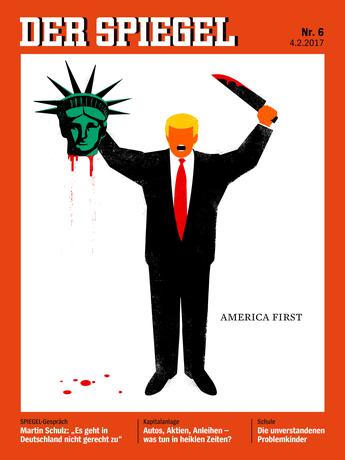 U. S. President Donald Trump is depicted beheading the Statue of Liberty in this illustration on the cover of the latest issue of German news magazine Der Spiegel. Spiegel/Handout via REUTERS

It depicts a cartoon figure of Trump with a bloodied knife in one hand and the statue’s head, dripping with blood, in the other. It carries the caption: “America First”.

The artist who designed the cover, Edel Rodriguez, a Cuban who came to the United States in 1980 as a political refugee, told The Washington Post: “It’s a beheading of democracy, a beheading of a sacred symbol.”

The cover set off a debate on Twitter and in German and international media, with Alexander Graf Lambsdorff, a member of Germany’s Free Democrats (FDP) and vice president of the European Parliament, describing it as “tasteless”.

“There is an implicit moral obligation to those who share risk,” Petraeus, a former CIA director, said at the American Enterprise Institute in Washington, D.C. on Friday afternoon. “It’s very important for the future as well.”

Petraeus made the remarks on the Special Immigrant Visa program for local translators in Iraq and Afghanistan who have aided the U.S. military amidst backlash over President Donald Trump’s executive order on immigration.

“Presumably, the terror attack was committed by Ukrainian special services aiming to destabilize the situation in the republic [of Lugansk],” Marochko added.

Russia and India are developing a new version of the BrahMos supersonic cruise missile that could be launched from submarines and the Sukhoi T-50 PAK-FA fifth-generation stealth fighter.

The new variant—which is considerably smaller than the original BrahMos—would be light enough to be carried even on relatively diminutive Mikoyan MiG-35 Fulcrum-F.

TERRORISTS in eastern Aleppo stitched grenades to children’s dolls in the final days before the city was wrenched back into Syrian government control.

Dozens of booby-trapped toys have been found under the wreckage of the one of the city’s buildings — levelled by Russian warplanes and troops loyal to dictator Bashar al-Assad.