One of the policy changes expected under the new administration of US President Donald Trump will be a scaling back of the Pentagon’s ambitious military exchange program with China.

Trump said during his inaugural address Jan. 20 that for decades the United States has “subsidized the armies of other countries while allowing for the very sad depletion of our military.”

The president did not specify what nations’ militaries gained from US subsidies.

FBI Director James Comey to stay on in Trump administration

Trump on Comey: ‘He’s become more famous than me’

By Matt Zapotosky, Ellen Nakashima and Sari Horwitz
FBI Director James B. Comey, whose agents are pursuing multiple lines of inquiry that intersect with the Trump administration and who himself is under a Department of Justice Inspector General investigation, has told people he has been asked to stay in his post, people familiar with the matter say.

The military budget, missile defense, and cyber defense are priorities for the new White House, according to a statement on its website laying out Trump’s plan to “make our military strong again.”

Two high-level Iranian government backers, including a former Islamic Republic official and another accused of lobbying on Tehran’s behalf, were hosted at the Obama White House for more than 30 meetings with top officials at key junctures in the former administration’s contested diplomacy with Iran, according to White House visitor logs that provide a window into the former administration’s outreach to leading pro-Iran advocates.

Seyed Mousavian, a former Iranian diplomat and head of its national security council, was hosted at the White House at least three times, while Trita Parsi, a pro-Iran advocate long accused of hiding his ties to the Iranian government, met with Obama administration officials some 33 times, according to recently updated visitor logs.

China has deployed advanced Dongfeng-41 ICBMs in Heilongjiang Province, which borders Russia, according to reports based on images, possibly leaked to coincide with Donald Trump’s inauguration as US president.

“Pictures of China’s Dongfeng-41 ballistic missile were exposed on Chinese mainland websites,” the Global Times said citing reports in “some Hong Kong and Taiwan media.” Russian news agencies identified one of them as the Apple Daily, a Hong Kong-based tabloid-style resource.

“It was revealed that the pictures were taken in Heilongjiang Province. Military analysts believe that this is perhaps the second Dongfeng-41 strategic missile brigade and it should be deployed in northeastern China,” the report in the Chinese daily adds. The Global Times works under the auspices of the People’s Daily, the official newspaper of the Chinese Communist Party, though the former tends to be more controversial.

The DF-41 is a three-stage solid-propellant missile, which is estimated to have a range of up to 15,000km and be capable of delivering up to 10 MIRVed nuclear warheads. China is yet to show the ICBM to the general public during a military parade or any similar event. Most information of the advanced weapon remains highly classified.

Russian President Vladimir Putin will hold a meeting with King of Jordan Abdullah II on January 25, the Kremlin press service said Tuesday. “Key aspects of the situation in the Middle East and North Africa, particularly joint steps aimed at combating global terrorism are expected to top the meeting’s agenda,” it said. The two leaders also plan to discuss Russian-Jordanian relations including the prospects for trade, economic and humanitarian cooperation, TASS reported. The Jordanian king will be on a working visit to Moscow at Putin’s invitation.

An emergency relief helicopter believed to be carrying six people crashed in a mountainous area of central Italy on Tuesday but there was no immediate information about possible casualties, Italian media said. State broadcaster RAI said the helicopter had been picking up a person injured in a skiing accident and did not appear to be involved in a rescue operation following last week’s avalanche that buried a hotel in the same region of Italy. (Reuters)

© Francois Lenoir / Reuters
US citizens and Orthodox Jews were the targets of suicide bombers in Brussels Zaventem Airport in March 2016, a report citing investigation sources said, adding that one of the bombers decided to pursue 2 Jews, instead of 60 high school students.

The report released by AFP, which contacted investigators from different countries probing the attack, states that the Brussels attackers were not targeting random people.

“It’s clear they had quite specific targets… We know they wanted to target Americans,” one source said on condition of anonymity, adding that one of the suicide bombers “attacked the [US] Delta Airlines check-in.”

“We know they were obsessed with the Israelis too,” the source added when asked if the bomber targeted Israeli check-ins.

Four American citizens were among the casualties in the Brussels bombings, according to data from the US State Department. Two Israeli citizens were injured in the attacks.

One of the suicide bombers in Zaventem Airport, Najim Laachraoui, a Belgian-Moroccan national, was reportedly standing among about 60 high school students before the attack happened, camera footage never released to the public showed, AFP reports. The extremist, however, suddenly decided to pursue two Orthodox Jews.

Russia, Iran and Turkey issued a joint statement following Syrian peace talks in Astana.
An international meeting on the Syrian settlement began in the capital of Kazakhstan on January 23 with the participation of a number of delegations, including armed opposition, Damascus, Russia, Iran and Turkey.

Russia, Iran and Turkey reiterated that there is no military solution to the Syrian war and that only a political process can resolve the crisis. The states reaffirmed their committment to independence and territorial integrity of Syria.

The guarantors “express their conviction that there is no military solution to the Syrian conflict and that it can only be solved through a political process,” the statement read.

Trump Puts Jerusalem Embassy Move on Back Burner — Why Is Right Wing Not Howling?

Israel could be, in fact, the reason behind the Trump administration’s decision to slam the brakes on the embassy relocation.

“I suspect that Bibi wasn’t thrilled about it because it has implications on Israel’s relations with Jordan,” said Shoshana Bryen, senior director of the Jewish Policy Center, a conservative think tank. “I’ve never seen moving the embassy as a top priority for Israel.” Bryen believes that while moving the entire American embassy from Tel Aviv to Jerusalem could be a challenging project fraught with risks for Israelis fearing the future of relations with neighboring Jordan, smaller steps could be taken to maintain the symbolic impact of having the U.S. government conduct its diplomacy from Jerusalem.

Trump’s ambassador-designate to Israel, David Friedman, has already indicated he intends to live in Jerusalem, and if Friedman conducts at least part of his work from the existing American consulate in the city while reporting to the embassy, that could send the same message. Bryen believes that the hiccups in the Trump administration’s conduct regarding moving the embassy, are indicative of the lack of preparation on their behalf. “I don’t know that they’ve changed their mind,” she said, “they are just discovering it’s a lot more complicated than they had thought.”

The trilateral consultations between Russia Iran and Turkey on Syria have ended in Astana, the opposition and the Syrian government will not take part in the final session, a source in the government delegation told Sputnik on Tuesday.

ASTANA (Sputnik) – Earlier in the day, another source said that the final session might be attended by the government and opposition delegations.

“The trilateral session has concluded. There is information that Syrian government and opposition delegation will not be present at the final session. The final statement will be read out loud by Kazakhstan in the presence of the guarantor states,” the source said. 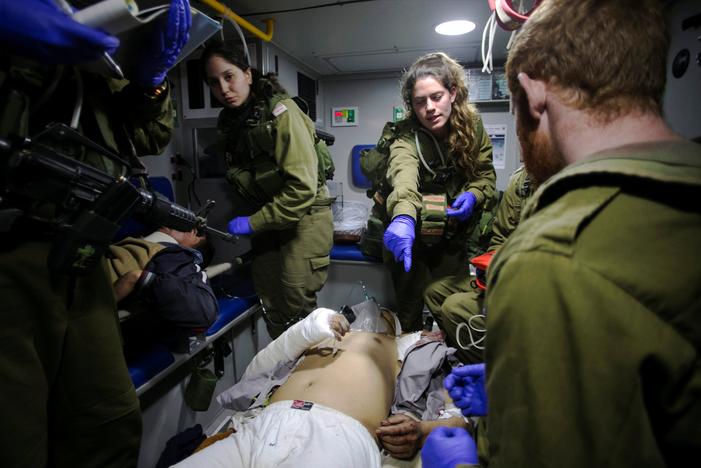 It happens nearly every night. After dark, the Syrian wounded come to known locations on the Israel-Syria front in the Golan Heights, driven by desperation to seek help from an enemy army.

Israeli soldiers on lookout or patrol spot them waiting by the fence and whisk them away to a rear position where army medics soon arrive, according to army officials operating in the area that was seized by Israel in the 1967 Middle East war.

Israel refuses to accept refugees fleeing the nearly six-year conflict in Syria, a country with which it remains technically at war. But it has allowed in more than 2,600 Syrians for medical care.

Although PYD is the ruling political party in Syrian Kurdistan, Turkish officials also use the acronym to refer to its US-backed armed wing People’s Protection Units (YPG).

“It is clear that this armed organization which is made up of only a several thousand militants has become the central element of the region’s instability,” Kurtulmus told reporters at an Ankara press conference.

“[The US] must renounce backing this terror group engaged in activities against Turkey,” he added.

I cover business and investing in emerging markets.

Haters gonna hate. But hating Russia as investment story this year might prove as unproductive as it did in 2016, when the Russian small to mid-cap index rose over 95%. And now that Russia has become the world’s leading producer of hydrocarbons, surpassing Saudi Arabia, and the new administration of Donald Trump has signaled and end to anti-Russian belligerence, investors are piling in.

Germany is concerned that it is being left on the sidelines by Donald Trump, with senior advisers unable to open communication channels with the new administration.

The Merkel government is insisting the US hhonorsexisting trade agreements amid fears the country is in for “a rough ride” from President Trump, who has said the UK will be “at the front of the queue” for new deals.

And, according to reports in German media, advisors to the Chancellor have “given up” hoping that the new President will act in a statesmanlike manner.

Defense News Reports:  TEL AVIV — The Israel Defense Forces (IDF) is beginning work on a new multiyear modernization road map that takes into account an influx of $38 billion in US-promised grant aid from 2019 through 2028, the military’s top planner said on Monday.

Addressing an annual conference here of the Institute for National Security Studies (INSS), Maj. Gen. Amikam Norkin, IDF head of planning (J-5), said the additional US aid – codified in a September 2016 US-Israel memorandum of understanding – allows the military to plan for long-term procurement aimed at preserving superiority through 2030.

“The MoU with the US allows us to plan our force buildup based on this very significant American aid. We aim to translate this into military capabilities … it’s a process that we will start in the coming weeks,” Norkin said.