An undercover video uncovers a terrorist group planning to carry out attacks against the Trump inauguration by targeting one of the post-swearing-in balls at a Washington DC hotel.  The alleged domestic terrorists say they intend to block the fire extinguishing system and release butyric acid on the assembled guests.  Butyric acid is a carboxylic acid with a very strong odor.  The substance is corrosive to the eyes, the skin and the respiratory tract. “Inhalation of butyric acid may result in soreness of throat, coughing, a burning sensation, and labored breathing. Ingestion of the acid may result in abdominal pain, shock, and collapse. Physical exposure to the acid may result in pain, blistering and skin burns, while exposure to the eyes may result in pain, severe deep burns and loss of vision.”

The substance “has also been used as a stink bomb by Sea Shepherd Conservation Society to disrupt Japanese whaling crews, as well as by anti-abortion protesters to disrupt abortion clinics. ” (https://en.wikipedia.org/wiki/Butyric_acid)

The video has been made available to the FBI, Secret Service and DC Metropolitan Police.

The undercover video can be found here:

Pictured: The moment security forces pin suspected Istanbul ISIS terrorist to the ground and arrest him just 25 MILES from the nightclub ‘where he gunned down 39 New Year’s Eve revelers’

By Abe Hawken For Mailonline

According to Turkish media, the main suspect in the attack on Reina nightclub was apprehended in Istanbul late on Monday.

Abdulkadir Masharipov was reportedly caught in his friend’s house in Esenyurt district of the city – 25 miles from where the brutal attack took place.

A photograph shows the moment Abdulkadir Masharipov was arrested in Istanbul, with blood on his face and t-shirt (left). Security forces pinned the suspect to the ground (right)

The FBI on Monday arrested the wife of the gunman in the Pulse Nightclub massacre on charges connected to the shooting rampage, investigators confirmed to Fox News.

The June 2016 shooting, seen as the deadliest in modern U.S. history, killed 49 people and wounded dozens more. Police shot and killed gunman Omar Mateen after a three-hour standoff, during which he pledged allegiance to the Islamic State terror group.

The charges against his wife, 30-year-old Noor Salman, included aiding and abetting his attempts to support ISIS, as well as obstruction of justice.

Keith Ellison, who is campaigning to become Democratic National Committee chairman, met with Hamas fundraiser Mohammed al-Hanooti at a 2009 campaign fundraiser for Virginia House of Delegates candidate Esam Omeish. Ellison was the keynote speaker at the event.
[Hamas is a terrorist organization. –ed]

Last week Chuck Ross at The Daily Caller reported on the appearance of Ellison at the Omeish campaign event, noting that Omeish had previously called for Palestinians to follow “the jihad way” against Israel.

Given that, it’s no surprise to find al-Hanooti, who styled himself as “grand mufti” of Washington D.C. and whom FBI documents identify as a top U.S. fundraiser for Hamas, at the campaign fundraiser.

Pictures posted to Flickr by Omeish show Ellision and al-Hanooti chatting at the event.

Mohammed al-Hanooti has been identified by federal prosecutors and top counterterrorism officials as an enthusiastic supporter of Hamas — serving as one of its top fundraisers — and also as an active supporter of terrorism and extremist Islamic ideology for several decades.

He also holds the rare distinction of not only being named by prosecutors as an unindicted co-conspirator in the Holy Land Foundation trial, the largest terror-finance case in American history, but also of being listed as a conspirator in the trial of “Blind Sheik” Omar Abdel Rahman for the 1993 World Trade Center bombing and the planned follow-up attack on New York City landmarks. FBI agents have also testified that al-Hanooti was a participant in an infamous 1993 meeting in Philadelphia of senior Hamas leaders in the U.S.

Some 300 U.S. Marines landed in Norway on Monday for a six-month deployment, the first time since World War Two that foreign troops have been allowed to be stationed there, in a deployment which has irked Norway’s Arctic neighbor Russia.

Officials played down any link between the operation and NATO concerns over Russia, but the deployment coincides with the U.S. sending several thousand troops to Poland to beef up its Eastern European allies worried about Moscow’s assertiveness.

It came as German car manufacturers also rounded on the President-elect warning that the US would be “shooting itself in the foot” if he slaps a 35 per cent tariffs on cars manufactured in Germany.

EXCLUSIVE: Nearly two dozen former top U.S. government officials have urged President-elect Donald Trump to work with Iran’s opposition once in office, according to a letter obtained by Fox News.

A letter signed by 23 former officeholders calls on Trump to consult with the Paris-based National Council of Resistance of Iran (NCRI). The group has called for free elections and freedom of religion in Iran, as well as an end to what it calls Tehran’s “religious dictatorship.”

US transfers 10 Guantanamo prisoners to Oman

22 Gitmo detainees to be transferred before the inauguration

DUBAI, United Arab Emirates –  Oman said Monday it accepted 10 inmates from the U.S. prison at Guantanamo Bay ahead of President Barack Obama leaving office, part of his efforts to shrink the facility he promised to close.

There was no immediate word from the U.S. Defense Department about the transfer.

Oman’s Foreign Ministry said in a statement carried by the state-run Oman News Agency that it had accepted the prisoners at Obama’s request. It did not name the prisoners.

By KYLE FELDSCHER (@KYLE_FELDSCHER) • 1/15/17 7:24 PM
President-elect Trump believes more countries are going to leave the European Union and thinks the North Atlantic Treaty Organization is now obsolete, he said in an interview with German newspaper Bild.

“It’s obsolete, first because it was designed many, many years ago,” Trump said of NATO, according to a write-up in Bloomberg. “Secondly, countries aren’t paying what they should,” and NATO “didn’t deal with terrorism.”

The comments will undoubtedly concern America’s allies in Europe after Trump has voiced support for strengthening the United States’ relationship with Russia after he comes into office. It may cause some discord inside his own administration, as retired Marine Gen. James Mattis said during his secretary of defense confirmation hearing this week that Russia’s goal is to destroy NATO.

Border guards with dogs patrolling the border with Lithuania in the area of the Curonian Spit. © Igor Zarembo / Sputnik
3075
Russia says it’s ready to supply Lithuania with bricks after Vilnius announced the construction of a fence on its Russian border. Lithuanian officials say the barrier will protect the Baltic nation and the EU from the ‘Russian threat’.

News about the proposed fence on the border with Kaliningrad, a Russian exclave located between Poland and Lithuania, emerged in Lithuanian media on Saturday.

“The fence is like a sign that [Lithuania] views the neighboring country as a potential aggressor,” Interior Minister Eimutis Misiunas said, as cited by Lietuvos zinios newspaper.

A Turkish cargo plane flying from Hong Kong has crashed in Kyrgyzstan, killing all four crew members and at least 33 people on the ground, officials say.

The Boeing 747 aircraft operated by ACT Airlines crashed as it landed in fog at Manas airport, 25km (15 miles) north of the capital, Bishkek.

At least 15 buildings were destroyed in a village outside the airport, with a number of children among the dead.

Flight TK6491 was to have stopped at Manas en route to Istanbul in Turkey.

ACT is an Istanbul-based airline operating under the name MyCargo. The plane is believed to have been about 14 years old. 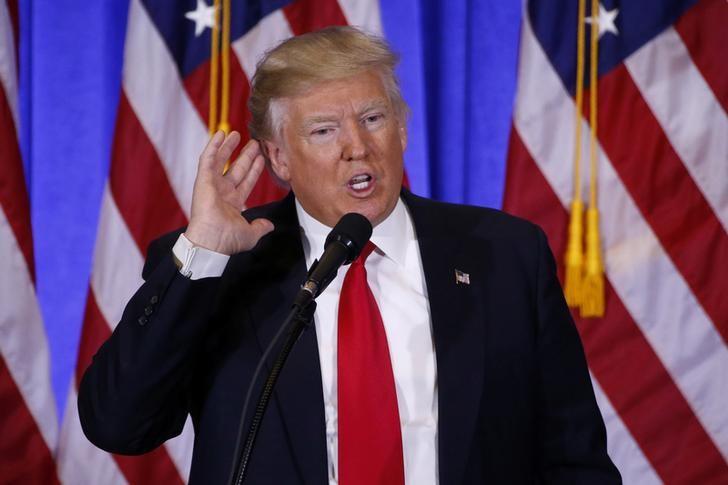 U.S. President-elect Donald Trump will propose offering to end sanctions imposed on Russia over its annexation of Crimea in return for a nuclear arms reduction deal with Moscow, he told The Times of London.

Criticizing previous U.S. foreign policy in an interview published on Monday, he described the U.S.-led invasion of Iraq in 2003 as possibly the gravest error in the history of the United States and akin to “throwing rocks into a beehive”.

But Trump, who will be inaugurated on Friday as the 45th U.S. president, raised the prospect of the first big nuclear arms control agreement with Moscow since the Strategic Arms Reduction Treaty signed by President Barack Obama in 2010.

“They have sanctions on Russia — let’s see if we can make some good deals with Russia,” the Republican president-elect was quoted as saying by The Times

Senior French officials met a few weeks ago in New York with President-elect Donald Trump’s advisers and presented the program for the international peace conference to be held Sunday in Paris, Haaretz has learned. Trump’s team was said to have objected strenuously to the very holding of the conference, especially at this time, five days before Trump’s inauguration.

EU nations brace for another tidal wave of economic migrants

European nations are warning that once the weather warms this spring, an unprecedented” wave of economic migrants will attempt to cross the Mediterranean to reach the shores of Europe.

Nearly a million refugees made the crossing in 2015, inundating Germany, Austria, and many other European countries. Most of those refugees were from Syria and Iraq – war torn nations with tens of thousands trying to escape the violence.

This time, most of the refugees will be from Africa – Niger, Nigeria, Ethiopia, Mauritania, Mali and Chad, among others. While there is violence in several of those countries, the primary reason that people want to make the dangerous crossing is economic opportunity.

The move at the EU’s Foreign Affairs Council on Monday, described as “highly irregular” by Haaretz, comes a day after the country refused to sign the closing statement, which was designed to relaunch stalled negotiations between the Palestinians and Israelis over a two-state solution.

Britain said that the statement risked “hardening positions”, particularly as neither of the parties affected was present at the conference.

“We have particular reservations about an international conference intended to advance peace between the parties that does not involve them – indeed which is taking place against the wishes of the Israelis – and which is taking place just days before the transition to a new American president when the US will be the ultimate guarantor of any agreement,” the Foreign Office said in a statement.

“There are risks therefore that this conference hardens positions at a time when we need to be encouraging the conditions for peace.”