The Turkish story on the Russian jet shoot down does not hold up.  In fact, the evidence points to a deliberate provocation by Turkey with the intention of drawing NATO into a general war against Syria and Russia. That’s why the Turks immediately asked for an emergency NATO meeting even though there is no NATO operation either in Iraq or Syria, and no NATO member was attacked.  NATO is a collective defense system. If a NATO member is attacked, then the other members of NATO can exercise collective defense (although there is nothing in the NATO system requiring the members to come to the defense of one under attack).

In fact, the Turks have been working hard for some time to “Nato-ize” the conflict in Syria.  That is why they have insisted that the privileges they have given to the United States at the Incirlik air base, where the US has stationed F-16’s and A-10’s,  is permitted as a NATO operation (notwithstanding the fact there is no NATO operation).

The Turkish story is that Turkish F-16 jets “intercepted” the Russian aircraft and shot it down with an air to air missile.

Strangely, the downing of the jet was filmed by Turkish TV, suggesting as some have already noted, that they were in position to record the event.

The piece of Turkey where the Russian plane allegedly passed is only a tiny strip some few miles wide.  The Turks were tracking the Russian plane for some time and shot it down from behind.  The Russian plane apparently took no evasive action and was destroyed.  From the photos it was clearly hit from behind, suggesting the Turkish planes may well have been in Syrian air space when they fired their air to air (AIM 9L) missile.

The Sukhoi is an old airplane which lacks speed and modern radar. It does however, have GPS in the “M” version which is what is flying in Syria.  So the Russian pilots knew where they were.

If in fact it is true that the Russian plane was warned, isn’t it plausible to think they were unconcerned because they were inside Syria’s air space?

Moreover, the time the Russian plane could have passed through Turkish airspace, given its speed and the tiny piece of Turkish territory we are speaking of, could only have been less than 20 seconds.* In this time the Turks claim they gave ten warnings (!) and that they got approval for hitting the Russian airplane from the Deputy Prime Minister.  Sorry guys, this is impossible.  The scenario makes no sense.

Now unnamed US officials are saying the jet was hit over Syrian territory, after supporting the Turks officially.

The Sukhoi 24M was hit from behind as the Turkish TV film clearly shows. The pilot was murdered by Turkish-supported Islamists shooting him either as he parachuted or, according to a different story, point blank when he was on the ground. The flight engineer was rescued by the Russians. Among other things this suggests that the Turks probably fired on the Russian plane while the Turkish F-16’s were in Syrian air space –otherwise they could never have made the shot.  Typically two missiles are fired at a target; the imagery suggests only one struck the Su-24. Thus the Turks acted illegally.

When a warning is not observed (if there was one) the norm is that a warning shot is used to get the pilot’s attention.  This holds for both naval and air operations.  In an air encounter, the chase plane flies beside the intruder and warns him, including even hand motions showing him to flee. If he does not, a warning shot is next.  Such encounters have been fairly common in Europe and along the Atlantic coast.  Obama declined to engage Russian long range aircraft in Alaska and California.

The decision to use an air to air missile is an intent to kill, not an intent to warn.  In and of itself it is a provocation because of how it was done. 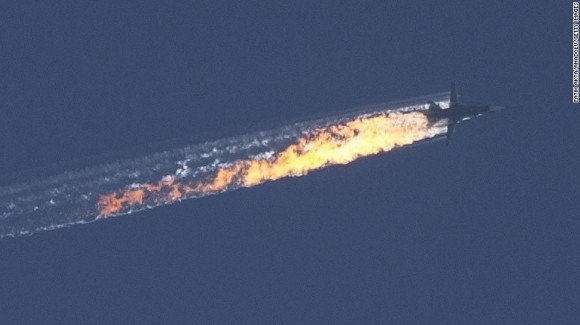 This leads me to think this was a provocation consistent with the Turkish desperation to draw NATO into the conflict, get rid of Assad, and push the Russians out.  In leading up to this, the Turks affected a positive attitude toward Russia and Putin specifically, and Putin thought he had a potential partnership with Turkey, going so far as to extol the relationship in a public meeting in Russia. That is why Putin says he was stabbed in the back. In fact even worse: he was set up.

*The Turks have now admitted to 18 seconds.