The Swarming Boat Problem –What Does it Mean?

by Stephen Bryen
The US Navy has been concerned for some time about the threat of “swarming” boats.  This threat is seen as very strong where American warships go through narrow passageways like the Strait of Hormuz, or around important anchorages, as for example near key oil ports.
The swarming boat thesis is that terrorist, whether directly or indirectly state sponsored (i.e., Hezbollah, al-Qaeda) will load up a number of small boats with high explosives and drive them toward US warships at relatively high speed.  These boats, which just need a couple of high powered outboard motors, can move very fast.  Because they are made out of fiberglass and do not protrude far above the waterline, they are hard to see, hard to catch on radar, and hard to shoot at because they expose very little surface. 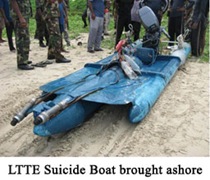 A swarming boat attack can be a suicide attack, or it can be an attack where the boat driver jumps out at the last minute.  Or, in a more sophisticated version, the swarming boats can be remote controlled.
Swarming boats can be launched from shore at night, or they can be dropped into the water from old transport ships or empty, obsolete oil tankers.
Multiple boats coming at a US Naval ships present a problem, because it is unlikely that the ship’s missiles can hit these targets.  This leaves only the guns on the ship to do the job.

American ships today are significantly under-gunned. During the 80’s Pentagon planners were focused on “big” naval threats like the Soviet Union.  Ships needed missiles to fire, guns were thought to be obsolete.
Most US warships have a CIWS gun (pronounced Sea-Wiz).  This is a 20mm Gatling gun that was put on ships to take on any enemy missile that got through past the missile defense on the ship.  CIWS fires a lot of rounds very rapidly, but it also runs out of ammunition just as fast.  It is a short range gun, but probably will not be very effective against multiple swarming boats coming in from different angles of attack.  CIWS was only used once in 1991 against an Iraqi Silkworm missile.  It missed its target but managed to hit one of its nearby sister ships.  Another CIWS, belonging to the Japanese Navy, shot down a US A-6 Intruder aircraft, when it was supposed to hit a target drone towed by the A-6.
The US Navy had a program to integrate the CIWS gun with the Oto Melara 76mm Compact 75 on US frigates.  The project, called Swarmbuster, does not seem to have been completed.  The Compact 75 is a long range 3 inch gun that is effective in the counter-ship counter-boat role. It also has ammunition with sufficient burst to blow a swarming boat out of the water.  Improved versions of the Oto gun fire 100 rounds per minute or better.  It can use the same sensor as the CIWS gun.
The US Navy is right to be worried about the swarming boat problem.  On the other hand, the Navy is not very well prepared to deal with the threat, particularly if the enemy strikes at night.  One wonders why, despite the depth of concern and the years the Navy has had to deal with the threat, very little (if anything) has been done to build proper countermeasures. 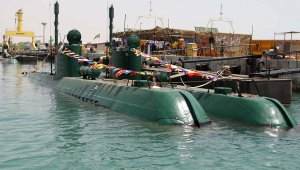 Iranian Mini-Subs Another Threat to US Navy ships

6 thoughts on “The Swarming Boat Problem –What Does it Mean?”